From my photo book titled Ladies in Waiting. The text explains the inspiration and process for this project. 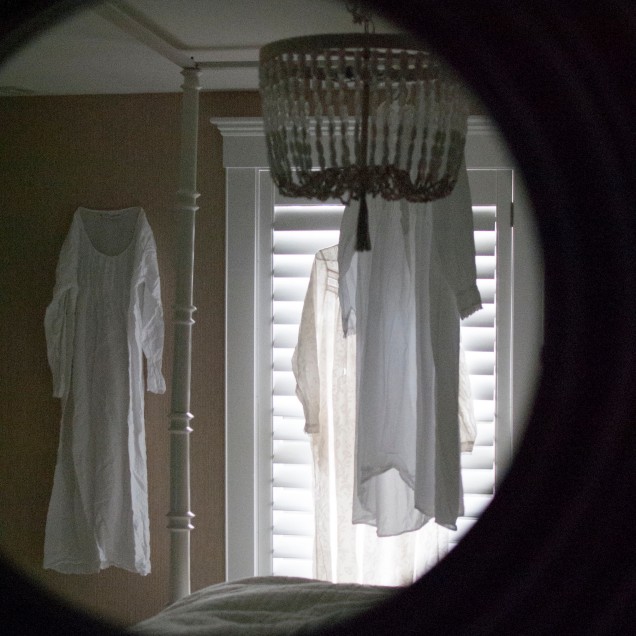 I had returned home for a week to be with my mother who was recovering from surgery due to a year of poor health. My time there was to be spent washing the dishes, cooking dinners, and doing the laundry. The important part was the laundry. While folding a load of freshly dried whites I came across my mother’s nightgowns. My mother has worn these since I could remember; they are a part of some of my earliest memories. Though, until this morning, the details of these dresses were unknown to me, being just foggy, white figures in my memory. Perhaps it was my mother’s present state of health, or another subconscious motive which made me inspect them, but holding them against the window I was intrigued by the ethereal quality that became them when the light passed through the lace trim and the odd holes in the fabric.

I did not know the concept for this series when I began to photograph these nightgowns. It was the first shoot I did, which was on a cliff, when I decided to revolve this series around the narrative of womanly ghosts on Nantucket Island. I placed the dress against some erratically grown branches, and the wind braced the gown against the tree. The figure of a woman appeared from these natural elements like a figurehead on a ship. It’s as though the ladies, traveling on the wind, swept in and out of the gowns giving them form and bringing them to life. These themes of wind and spontaneity continued through out the rest of the week at the various locations I chose to shoot. A line of rope and a few clothes pins were used to rig the dress to a tree so it would blow against the sky. Other times the dress was simply held and manipulated into the frame. I enjoyed this process and the series that resulted from it. For me, from my subjective perspective, ‘Ladies in Waiting’ has a sense of sentimentality: a bittersweetness for my home, the days of childhood ghost stories, and even my mother’s white nighties. (Fall 2014)